I love getting together with friends for Sew Days.

The weekend after the Pirate Quilters Retreat another group of friends gathered for a Sew Day. We were down a couple, PamKittyMorning and Alex were gone to Quilt Market and Holly was suffering (yeah, right) through a vacation in Hawaii. So it was just the “Triple D’s” again, Deanna, Debbie and me. Deanna had a morning commitment, so Debbie and I were on our own until the afternoon. When Deanna arrived we had a wonderful lunch of Veggies w/Dip, Italian Crockpot Beef sandwiches, Macaroni Salad and Chocolate Brownies for dessert and then continued on with our sewing. 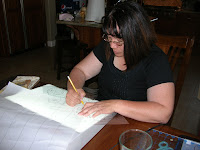 Debbie worked on some curtains and then prepped some leaves for an applique border. 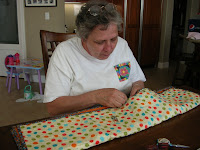 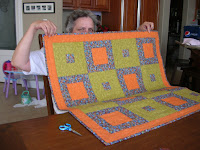 Deanna worked on a binding ... 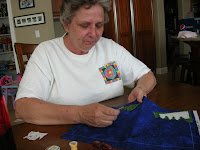 and then some applique.

I brought my sock blocks from the Lost Sock Swap that Marlene had organized. I thought I had mine all finished, but as I went though them I realized that I had mine to do still. So I did hand work instead of block trimming and sock block assembly. The day passed all too quickly.
Another Sew Day has been planned and I am looking forward to it once again – I just love days like these.
Posted by Deb Silva at 10:54 PM

Oh, how fun! It's always better when you're working with friends.